There are several transport arrangements to make for the day, including:

You may also need to consider how and where you return to after the funeral.

You can choose from different types of hearse to fit the funeral.  We have access to conventional car hearses, horse-drawn hearses and even motorbike hearses.  We're also delighted that 'Doris', our classic 1947 Daimler, is once again available.

We bought our Daimler DE hearse brand new in 1947 from renowned hearse builders Woodall Nicolsons of Halifax.  'Doris', as we like to call her, was used for many funerals. 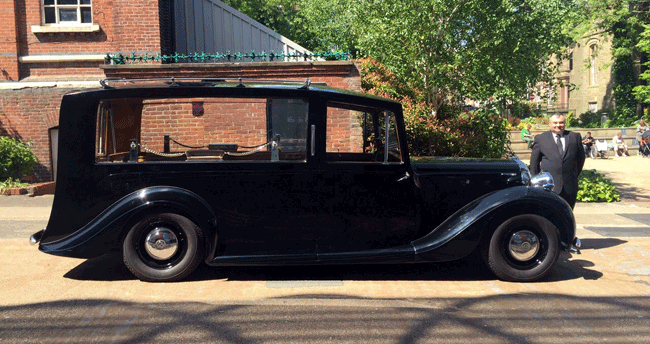 Our records show that this hearse was first used on 4th August 1947 for the funeral of Edward Finnigan of Clarksfield.  The funeral was held at St Anne’s RC Church before a burial at St Joseph’s Cemetery, Moston.  There were also 3 funeral cars, with the wake held at Whitehead’s Café, which was on George Street.

David Barlow is the only surviving driver of the hearse before we took it off the road in 1968.  A large increase of the Road Fund Licence to £58.50 made the car uneconomical to drive.  The licence was then based on weight, and Doris weighs over 2.5 tons.

Doris was 'mothballed' in our garage on Union Street West, despite many promises to "get that Daimler Hearse going again".

In April 2006 we commissioned Paul and Graham Naylor of Vintage Carriages to restore her.  Paul joined the 'Daimler Club' to source scarce parts. As Daimler made few hearses, some parts were unobtainable so Paul made these by hand.

After many years of loving and painstaking restoration, Doris is back to her former glory; a fully working, classic 1947 Daimler DE Hearse.

Doris is available once again to provide dignified and elegant transport when a funeral requires a vintage vehicle.